In the next few posts I will summarize my thoughts on the quarterly earnings reports released so far for the companies I own.   In this post I am going to look at Impac Mortgage, Rurban Financial, and PremierWest Bancorp.  I will follow that up shortly with another post that looks at Radian Group, PVF Capital and Community Bankers Trust.

In my post last week on Impac Mortgage, I noted the following concern:

In my opinion, the biggest short term risk is that the third quarter GAAP number disappoints. This could easily happen as a result of further charges to the repurchase reserve or mark to market changes to the trusts that overwhelm the profitability of the operating business. Given the run-up in the stock, a low GAAP number could cause some of the short term holders that haven’t looked closely at the businesses to run for the exits.

As it turned out my fear of a poor GAAP number was realized, but the strength of the underlying mortgage origination business was impossible to ignore, and the stock shot up higher anyways.

If you net out the legal settlement, which is a positive as it clears up some of the legacy reps and warranties uncertainty, and if you ignore the mark to market of the residual trusts, which are bogus because the trusts are non-recourse to the company and so there is no real liability there, the basic mortgage and real estate operations earned $1.50 for the quarter.   I’m not annualizing anything.  That is the quarterly earnings.  The stock is at $13 after today’s run up.  I don’t think its finished.

The company noted on the conference call that they are expanding their money purchase loans, as opposed to a focus on refinancing, by expanding their realtor network and their retail purchase business.  The company appears to be aware that the refinancing business is not going to last forever, and on the last two quarterly conference calls they have paid special attention to mention that they are focused on the new purchase side.  It appears that the California housing market is recovering (check out this article, Is a Sellers Market Emerging in California, for confirmation), which should add fuel to this fire.

It feels to me like we are back to where we were in Q2, trading at a level that undervalues current earnings by at least two or three times.  I bought more of the stock yesterday morning when it opened at$11.  Being up 9% seemed like nothing when earnings were growing by 100% in the quarter.  The action over the rest of the day confirmed these were not my thoughts alone.

I was really happy with the quarter at Rurban. The company showed another quarter of earnings growth and is on track to earn well over $1 per share this year (measured by both core and GAAP measures).  Keep in mind that Rurban core earnings primarily differs from GAAP because it excludes the mark to market adjustment to the mortgage servicing rights that it keeps on its balance sheet.  In my opinion, this makes the core earnings measure a better estimate of the company earnings than GAAP.

The company’s earnings were driven once again by the mortgage banking business.  Below is a chart of mortgage banking income over the past 8 quarters.  Note that the fourth quarter is typically the strongest volume quarter.

Earnings are strong and increasing, the stock is cheap, and no one seems to care.  I wrote to a friend the night of the earnings release that if the stock traded below $7 the next day I would buy more.  It did, and so I did.  What can you do?  You have to follow through on your convictions, and mine is that Rurban is worth  more than a smidgen over tangible book value, and more than 7 times earnings for the trailing twelve months.  A week later and the stock has moved up a bit, but its still isn’t coming close to recognizing the earnings that the company is generating.  At this point I don’t see any reason not to sit on my shares until someone sees the value and bids them up to the double digit level, at least through Q4, which barring some unforeseen event should show earnings higher than Q3.

It was with mixed feelings that I saw the press release on October 30th announcing the takeover (they called it a merger) of PremierWest by a private bank, AmericanWest Bank.  The takeover price was $1.65 a share.

For reasons unknown PremierWest had briefly fallen to $1 a couple of weeks before and I managed to pick some up in the $1.10 range.  So it was a nice turnaround on those shares, and still a decent return on the original shares I bought at $1.40.

Nevertheless, I think that the shares could have gone much higher had they traded for another year.  The third quarter results showed further improvement in nonperforming loans, and the first profit in years.  Nonperforming loans fell below 5% for the quarter.  And the costs associated with the companies real estate owned and problem loans, which were the items that had been holding back earnings, continued their descent. 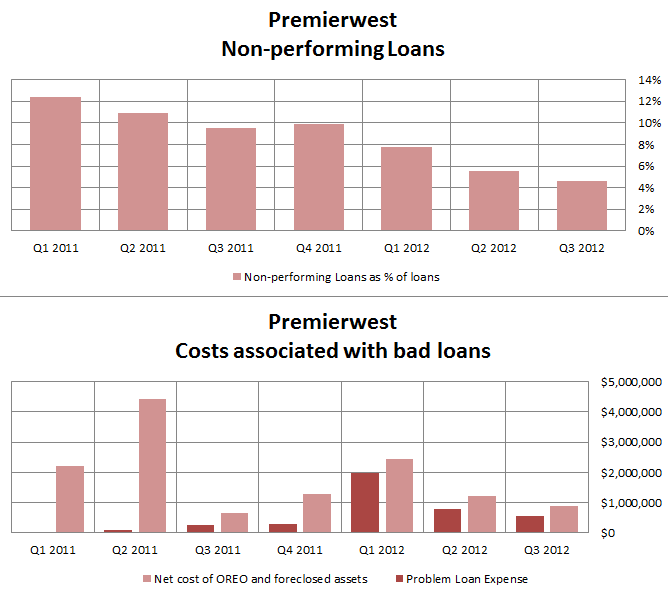 Had PremierWest continued to operate I am confident that they would have become consistently profitable.  Keep in mind that earnings before bad loan expense and provision for loss has been running at 10 cents per share a quarter.  As PremierWest began to approach earnings of 40 cent per share on a yearly basis, I find it hard to believe the stock would have remained mired below $2.  Tangible book value is north of $3.  You add it all up and it is a tale of what could have been.

I thought it was interesting that this article, posted in the Portland Business Journal, came out officially with the headline “Good Deal, Practical Price” but if you look at the link to the web page, it becomes clear that the author had different ideas, as the word practical replaced the word bad in the original copy.  The unfortunate part is that AmericanWest is private.  If shareholders could continue to participate through the recovery of the larger company, the taste would not be so bad.

But enough crying over spilled milk.  I don’t see much chance that the offer doesn’t go through, and the chances of another offer emerging seems unlikely.  I continue to hold my shares, as the current discount to the takeover price remains substantial, but if it narrowed I would sell and move on to other things.  As for those other things, one bank that I have mentioned a couple of times on twitter, and that fits the PremierWest profile of an under-capitalized bank working through a bad loan book but having tremendous earnings potential that is not reflected in the stock price if they do, is First Mariner Bancorp (FMAR).  The unfortunate thing is the stock is incredibly illiquid, and so you just have to throw a bid out there and hope that it eventually gets filled.  I’ve accumulated a small position in First Mariner, and if I could see some volume on the stock I would be tempted to add to it.