Arch Coal: Taking a Side on an Uncertain Outlook

I bought Arch Coal (ACI) last week on the thesis that the rise in natural gas prices along with the colder than expected March would lead to a change in perception from investors about the coal market.  I added to that position on weakness this week and now have what I would consider a full position (which is still only moderate in size because, as I described last week, my confidence in the natural gas thesis is somewhat tentative).

On Thursday I was pleased to see comments from Peabody Energy (from Seeking Alpha) that will contribute to the perception shift.

Now turning to the U.S. market, we have seen a dramatic improvement in coal fundamentals from this time last year. We now project 60 million to 80 million tons of increased coal demand in 2013 as the industry reclaims the majority of demand lost in 2012 to natural gas.

Within the U.S. market, winter was 17% colder than last year and natural gas prices have more than doubled from last April driving a 15 million ton increase in the first quarter coal burn at the same time the gas generation dropped 11%. Coal now accounts for approximately 40% of total generation, while gas has fallen to 24%. The supply side of the equation was also favorable in the first quarter as U.S. coal shipments fell 10%.

The end result is that PRB and Illinois Basin stockpiles have improved 20% over the last year, and over the next five years, we expect the low cost PRB and Illinois Basin demand to grow more than 125 million tons to a greater capacity utilization and regional switching, and this is after taking into account an estimated 60 gigawatts of retirements during that time.

You see U.S. generation only ran at 55% of full capacity in 2012. These plants can run much harder and utilities have invested more than $30 billion in new equipment over recent years to allow them to do just that.

I look at Arch Coal as more of a trade than a long-term investment.  My expectation is that the current price has discounted the trough of the coal market, and that the price of the stock will rise as evidence mounts that we have passed the bottom.  I am hoping that the color provided on the coal company first quarter results conference calls will be a catalyst.  Peabody gave us some indication of what to expect.

I picked Arch Coal because it is neither the best or the worst of the coal stocks, and has significant leverage to the domestic thermal market. 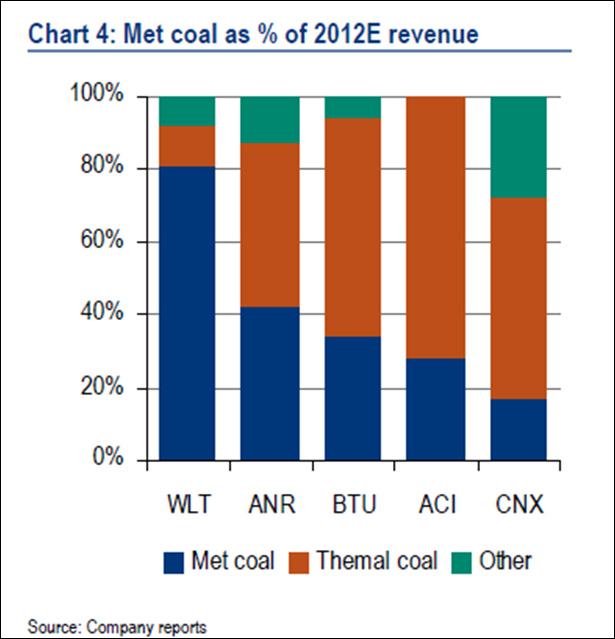 I looked at Cloud Peak and Consol Energy, which are lower cost producers, and decided against them because they are further away from the fulcrum of profitability than is Arch.  Both Cloud and Consol are profitable right now and thus I don’t expect the same kind of leverage to a swing in sentiment as I do with Arch. As I said, this is a trade and not a long-term position, and so I am less concerned with long-term comparisons that would likely favor companies like Consol and Cloud Peak.

On the other hand I was reluctant to take a chance on a more speculative stock; James River Coal for example, because I am only moderately confident that I am right about this, and I don’t want to run into a bankruptcy if I’m wrong.

I do not expect great results from Arch in the upcoming quarterly report, but much like the year-end report for MGIC I am hoping for a positive “the worst is out” response from the market.

The results from my modeling suggest that earnings and cash flow aren’t going to be pretty this year.  I expect earnings to be negative, between $1.00 to $2.00 for the full year before tax.  Cash flow from operations before items will be anywhere between (positive) $100 million to $300 million (or 50c to $1.50 per share) depending on the prices they can attain on their unpriced thermal and met coal (it worth pointing out that while Arch is levered to thermal coal over the long-term, because it has a significant quantity of unpriced Met Coal in 2013, its earnings this year are going to be very dependent on Met prices.  This is definitely a detractor for the idea), and where they end up within the range of their cost guidance.

It is unlikely that the company will generate significant free cash flow  in 2013.  Capital expenditures were guided to $330-$360 million.  However that includes the completion of the new Leer mine.  Maintenance capital alone is only around $170 million. Depending on whether operating cash flow comes out on the low-end or high-end of my range, Arch will end up either slightly in the red or the black on a free cash flow basis.

Because Arch is a levered bet on thermal coal prices, it is also a bet on the US economy.  This concerns me, because I have become less convinced that the US economy is on track to out-perform, but it is a risk I am willing to take on.  I am also concerned that Arch needs a relatively robust world economy for its Met coal, and the evidence of that is tepid at best.

So admittedly this is not a clear picture.  But in a way, that is exactly why I am willing to take the plunge.  Arch Coal is trading at a multi-year low (I have to go back more than 10 years to find the price below $5) because of the cloudy outlook.  There are some early signs that this outlook is beginning to change.   Let’s see if those signs continue to develop.  If they do I think we will see Arch quickly become a $6-$8 stock, which would be a significant return from current levels.