Week 146: Some thoughts on agility

See the end of the post for the current make up of my portfolio and the last four weeks of trades.

Four weeks ago I wrote:

I think an important pillar of my strategy to take advantage of the concentration that I can have.  I don’t have anyone pressuring me to be diversified or questioning my risk level or anyone to answer to if something goes wrong.  So I don’t hesitate to have a large percentage of my portfolio tied to the names I think will perform the best.

With that said, the names that I am currently of the heaviest weight are, of course, Pacific Ethanol, which remains my largest position by far

Today Pacific Ethanol represents a 2% position for me.

One pillar of my strategy is concentration.  Another is agility.  One of the biggest advantages I have as an individual investor is my ability to adjust to underlying conditions quickly.  In the case of Pacific Ethanol the rising price of corn along with the falling price of ethanol coincided to add significant risk to the thesis.  Not wanting to be leveraged to that downside possibility I quickly abandoned the thesis and moved on.

While it can be difficult, I think it is very important that I put ego aside and quickly reverse my conviction if things change.  Pacific Ethanol will still be there if conditions begin to turn for the positive.

The difficulty cutting ties is amplified when you write about your investment decisions and put them out there for all to see like I do.  I am sure I have lost a few readers after writing up a new idea with gusto only to turn sour on it a few weeks or months later.

I make no apologies for doing so.  My only goal here is to continue to compound my returns at as fast a rate as possible.  I am not interested in the accolades associated with eventually being proven right on any one particular security.

With that said, here are my top positions right now. 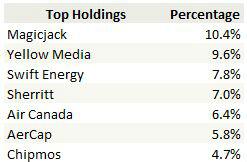 These positions have changed rather precipitously over the last five weeks, as is often the case.  During this minor downturn  I have been adding to many of these positions.  In particular I have added to Magicjack numerous times below $20, added to Chipmos below $22, added to Sherritt as its risen alongside the price of nickel, and initiated a new position in Aercap.  I have also added a new position in a former position with Equal Energy.

I decided to break out my discussion of Aercap into a separate post, which is here.  I want to talk more about magicJack, Chipmos and Equal below.

So let’s start with magicJack (CALL).  The stock got as high as $25 and has since retreated nearly half way back down its run from $13.  Like many of the stocks I own, there is significant upside here if things go right.  But I admit I am by no means certain that the outcome will be favorable.

What needs to happen over the next few months is a successful launch of the new Magicjack App and device (expected to come out in May), continue subscriber growth from their app, mitigate subscriber decline from the device, and show the ability that they can figure out a way to make money off the app customers in some way.

They may not be successful.  The competition on the app side is likely to increase, Google and Facebook are beginning to make inroads into the space,  and on the device side they are still bleeding customers.

A lot of this is going to hinge on the marketing blitz that will coincide with the new device release in May.  They are going to start to push the new app and push the device as a land line extension of the app.  If they are successful we will see significant subscriber growth on the app side, which should drag up device subscriptions to at least flat and allow investors to focus on future growth rather than potential obsolescence.

The key metrics to watch are whether they can grow subscriptions and grow renewal revenues.  Renewal revenues have consistently been going up for the last two years.  This is a driver of the company’s recurring cash flow, which is what really puts a floor to the stock.

I still like the risk/reward with the stock price in the teens, which I calculate puts the EV/EBITDA multiple in the 4’s.  I think there is a better chance this stock goes to $25 then there is that it goes back to $13.

I’ve owned Chipmos (IMOS) for a long time but I increased my position as the stock fell below $22.  The company’s majority owned Taiwan subsidiary began to trade on the major Taiwan exchange last week (quote here).  My expectation is that this should remove the arbitrage between the parent and its sub (fair value for Chipmos would be about $24 based on the current price of the subsidiary, an 11% discount based on last traded prices) and hopefully lead to an increase in the share price of the subsidiary, which would also be reflected in Chipmos stock.  Chipmos is not an expensive stock; it trades at about 5.5x EV/EBITDA based on their Q1 2014 forecast, shown below:

Equal Energy (EQU) is an old favorite that I exited after the company received a takeover bid from Petroflow late last year.  That deal now looks like it might not happen. The deadline for the completion of the acquisition is May 1st, and we are quickly coming up on that.  The rumor is that Petroflow is having difficulty arranging the financing.  In response the stock has fallen from a range around the offer price at $5.40  to the mid-$4’s.

The collapse of the deal isn’t what got my attention though.  What caught my eye was the introduction of a second deal put forth by Montclair Energy.  Montclair is proposing that Equal do a leverage recap by which they would use debt to buyback 48% of their shares at $6.

Montclair put together a presentation to outline the proposal and the undervaluation that they see in Equal.  Its available here and well worth reading through.

The one unfortunate thing is that Equal has hedge about 80% of their 2014 production at a little over $4/mcf.  I find this unfortunate because I think gas is likely going higher and a great kicker in the deal would be the upside from increasing gas prices.

But even with the hedges, the stock looks pretty cheap to me.  If we assume the company gets $4/mcf gas for 2014, which is going to be conservative given the hedges, and we assume production is flat on average at 6,500 boe/d, I calculate that the company can generate EBITDA of a little more than $50 million.  At the current stock price that puts the EV/EBITDA multiple at less than 4.

Other positions I added or exited

On the add side, apart from Air Canada and Aercap, which I have already wrote about, I added positions in Transat A.T and Rogers Sugar.  I plan to write both of these up in the short term so I’ll say more about each at that time.

I sold out of Nordion, which had received a takeover bid a few weeks prior, out of Avcorp, which was a very small position in a Venture speculation that wasn’t panning out, out of Glacier Media, and out of Macro Enterprises. As I tweeted at one point a few weeks back, I am not loving the illiquid stocks, and expect to keep my distance from all but the most enticing.

I did some cleaning up of my on-line portfolio and removed Timmins Gold, which was a position that I had sold out of a number of weeks back in my actual account but had overlooked here.

Also worth noting, I reduced my position in Pacific Ethanol further and will remain wary until the price of ethanol turns around.  In this post a few weeks back I gave some very good reasons to believe that ethanol prices are going to settle higher than in the past, but so far things aren’t playing out that way.  A quick look at prices shows that exchange traded ethanol is down to $2.20/gallon (and while California ethanol remains at a significant premium to this, the other coastal hubs, NYH Barge and Gulf Coast, have seen their premiums falling precipitously).

Click here for the last four weeks of trades.